I knew it was coming someday, and it was my own fault. She was already in bed, curled up, occupying the space that would hold my feet if that little Punkin’ wasn’t there. I bent down at the foot of the bed to kiss her on the head and she didn’t feel me coming. Bless her, she can’t see, hear nor smell very well,  but most of the time she senses me present. She didn’t hurt me and didn’t growl. It was as close as she could get to biting without biting.

Jameson Blair Graham, the oldest grandson, will turn fourteen on May 17.  Our little black and white fuzzball Murphy Sweet Punkin’ has been plagued with medical problems, including an autoimmune disease, and has already lived past the average age of demise for a Shih-tzu. In contrast, Jameson is leaned in and fast approaching adulthood. He’s left all pre-teen notions behind and is a bonafide, full-fledged teenager.  He still loves his young cousin, and they think he’s wonderful. He’ll be driving on a learner’s permit in a little over a year.

We bought a lift chair for Dad yesterday. It is a pretty chair, just the right size for his space, chocolate brown faux suede. 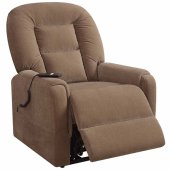 Dad turns eighty-nine in September. He’s fallen several times since Christmas, the time when his scleroderma started acting out as if on a mission. Some days, he’s needed help to get out of his old favorite recliner–or actually any chair he sits in. His legs won’t hold him up without his Rollator, and several times a day, he can’t even move his feet holding to the walker.

After Sunday Dinner this week, Dave and I made the decision to set the table at the apartment from now on. Mom always writes Sunday Dinner with the two capitals, I think because it’s one of their favorite times at our house.  We set the table with the good silverware and glasses, and we always use cloth napkins–unless we’re eating pasta with red sauce or pork barbecue. Dad was too weak to eat Sunday. It was exhausting to walk those one hundred steps or so to the table, impossible for him to navigate to a chair in the den, and futile to think he could get out of his at-my-house favorite, an old red chenille recliner.

Murphy loved Old Red in her younger years. It’s been a long time since she could jump on and off a chair. 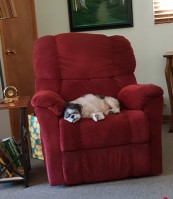 Monday morning, he was in the bedroom trying to play Merle Haggard on his new boombox (generously donated on Sunday afternoon by fellow book-clubber Susan) when he fell, punching out the cane back of his sturdy wooden chair. I hurried next door when Mom called. Dave was away from home, but I knew I could call on neighbor Don to help me get him up if necessary.  I found Dad on all fours, trying to crawl across the bedroom to the bathroom. He knew he needed to clean up and change some clothes. With Mom’s help, I convinced him to get his chest against his punched-out chair. It took three tries, but I got him up–and he helped. His voice was so weak I could barely hear him.

Once in the bathroom, he cleaned up as much as he could, holding himself upright by pressing against the clothes dryer. I “polished him off” and then scrubbed down the place, paying particular attention to the washer and dryer that acted as his props. I was reminded to find Mom a dryer since hers quit that very morning.  Later that afternoon, I bought a new dryer at Lowe’s and drove a few miles to Franklin to pick up my newly repaired sewing machine.

The dryer arrived on Tuesday morning.

We moved Dad’s old leather recliner downstairs to his study, a place nobody goes anymore except to water overwintering plants. We got another wooden armchair for Dad’s bedroom and started looking for a sturdy chair for the den, one that might be described as “easy in, easy out.”  Then we put Old Red up for sale, even though it really was the most comfortable seat in the house. It doesn’t match the den colors anyway.

So we’re prepared. We know what’s coming, but we don’t know how soon.

8 thoughts on “Murphy bit my nose.”