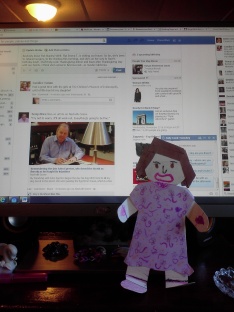 Surprise! Flat Emma T. arrived in Mid-November to spend some time with the folks in The Compound. Flat Emma T. is modeled on my great-niece, Emma, who is in Ms. Shivley’s class at Blue Oak School in Cameron Park, California. Cameron Park is in the metropolitan area of Sacramento. If you don’t know about “the Flats”, just google Flat Stanley and  you’ll get the whole story.

Flat Emma arrived just a wee tad late to enjoy a fun trip to the Biltmore Mansion in North Carolina, but just in time for some fast-paced activity with Aunt Diana and Uncle Dave, Grandmama, and Grandpapa. She was very helpful and considerate–a wonderful guest.

First order of business: second-eye cataract surgery for Aunt Diana. This picture was taken quite early in the morning. Looks like Aunt Diana is wearing her jammies! The next morning, it was off to Dr. Rebecca Taylor’s office to check the new lens. Dr. Taylor showed Emma how to do an eye ex-

amination and was impressed that Emma learned so fast.

That day was also Uncle Dave’s birthday. Emma offered to bake a lemon pie, his favorite, but Uncle Dave said he’d pass this time since he and Aunt Diana were doing WeightWatchers and Thanksgiving was going to be hard enough without adding another day of stress. On Thanksgiving Day, all of us piled into the van to drive over to the home of Emma’s mama’s first cousin, John. John’s family–

wife Vicky, Jameson, and Carly–served Thanksgiving brunch. Emma met the youngest (and most popular) member of the clan, Jaxton. Jaxton’s parents are Jade and Anjie; Jade is another “mama’s cousin”.

On the left, you see who’s holding Jaxton? Why, it’s Grandmama! We all tried not to eat too much because we were having Thanksgiving dinner at 4:00 P.M. When we got home, Emma helped decorate the dining table. Grandpapa was all dressed up for Thanksgiving, and he said the blessing.

After dinner, Emma was so tired that she just flopped on the recliner in Aunt Diana’s office. All of a sudden, she remembered that she was supposed to be helpful, and she got right up and helped dry and put away the silverware.

After that, she said she just really had to go to bed so she went right back to the recliner and slept all night, never did even put on her nightgown!

On Friday evening, Emma was asked out to go to see the Christmas lights at Opryland Hotel. She borrowed our camera to take some pictures. Wow! And one day she got to see The Parthenon, a full-size replica of the ancient Greek Parthenon–and it is right in Centennial Park in Nashville.

What a good time Emma had in Nashville–and so did we. Early during the next week, Emma said her goodbyes to Uncle Dave, Grandmama, and Grandpapa.  Aunt Diana said Emma could do one last thing before she left: she could go to the insurance lady’s office where Aunt Diana was going to sign up for one of the new ACA exchange plans (Affordable Care Act–some people call it Obamacare).

Aunt Diana says she was fortunate to already have health insurance but it cost way too much. So Emma listened in when Miss Linda explained the exchange plans and found out that Aunt Diana was going to save a whole bunch of money by going on a new plan, something that would not have been possible before the ACA.

“Emma,” Aunt Diana said, “I think we better get you on your way. You know, you really need to get to your next stop in order to get your holiday shopping done, if you’re going to do any.”

The whole family enjoyed Emma. We hope Emma has many more adventures on her trip around the country. We wish all good things for everyone in Ms. Shivley’s class!