The blackberry vines are loaded. Dad planted them our first spring here in The Compound. He built a sturdy arbor for them to grow in, through, and on. They’ve thanked him more profusely every year since then. 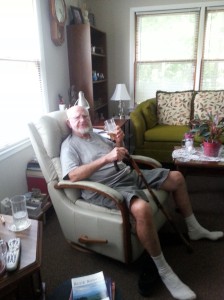 Night before last, I played “cocktail hour sub.” Dave takes Dad his one-per-day bourbon and Diet Coke promptly at 5:00 o’clock each evening–or he sends someone else with it if he’s bound up somewhere. I took iced tea in my favorite Mason jar sippee-cup. Mom delighted Murphy with the usual half-dozen (or more) bacon skins.

“Dad says there’s enough blackberries down there for a pie,” she said.

So last night, while Dave and I watched the PBS American Experience documentary “Freedom Summer,” I washed and cleaned the berries, and warmed them up to melt the heavy sugar I’d added. Then I put the butter in the long glass pan and slid it in the oven while I mixed the batter.

The smell of hot blackberries is summer, or heaven, or both, and the aroma of the sweet fruit’s cobbler wafting through the room always takes me back to the last time I picked blackberries on the Smith County farm before we moved to California. That was before Freedom Summer, a few years before I ever went to school with a black classmate, and a long time before I thought seriously about the sad consequences of racism.

We started out to the first berry patch early in the morning. We had to get to the berries before the sun got hot. I remember there were several of us picking, but I can think of only one specifically. That was my Aunt Virginia.

In those days, berry-picking was the only time you’d ever see the women in pants. All of us sported outfits borrowed from one of the men in the family, Aunt Virginia included. I wore a long-sleeved work shirt and my grandfather’s overalls. Pa Blair was a small man; even the length of the legs was perfect for me. We doused our ankles, wrists, and necks with coal oil to ward off ticks and chiggers, and then tucked the pants legs into long socks. We buttoned the necks of our collars and complained that someone was choking us.

I dropped my berries–Don’t throw ’em, just lay ’em in there soft-like–into a lard pail tied to my waist with a chain of rag strips. The bucket’s edges were rusted, the brand barely showing on the outside. Who knows how long it had hung around? I carried a tobacco stick and beat the ground under the briars in case there were any snakes lying in wait, and then propped it against a thick section of a bush. I needed two hands to pick berries. When we moved to the next patch, I reached for my stick.

We always tried to finish up by 11:30. I can almost feel the sun on my back through that chambray shirt, the clear signal to head to the house.

I found Dad’s berries on the kitchen counter, in a plastic gallon milk jug with a large hole cut in the side and a length of twine tied to the handle.

Dad eased into the kitchen. “So, Sis, do you think I got enough for a pie?”

“A small one.” I looped the loose twine around the milk jug’s handle and tied it in a bow. “I wonder how long it’s been since I’ve seen a lard bucket.”

“I think I left two or three up at the farm,” he answered.