I have grieved but not nearly as much as my dad. He made friends with the little grey and white kitten the first time TomTom crawled up the bank from the ravine. Dad was working outside and talked to his new friend every day until the cat was no longer afraid of him. Tom might have been six months old, or maybe just four. 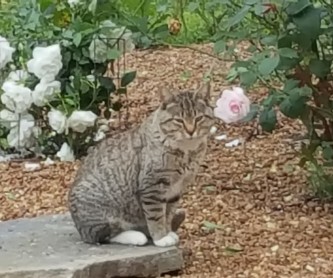 While Dad strolled around the Compound on his morning walk, Tom followed. Every chance he got, he rubbed Dad’s legs, sometimes winding between them to almost trip him. Dad learned to shake him loose. Tom didn’t mind.

One day I asked Dad if he had seen the tomcat that morning.

“Yes, I see some things that indicate to me that he is definitely a male.”

Dad named him TomTom, one of his favorite names for cats. He bought a little sherpa-lined bed and stuffed it into a protected spot on the apartment porch. Mom included Meow Mix on her grocery list.

TomTom chose Dave next. One morning, after he took the recycling cans to the street, Dave announced that Tom had let him pet him. I’ll admit I was a bit jealous.

“Well,” I said to Dad, “if that cat is going to stay around, I guess we better take him in for shots. And we need to have him neutered.”

I found a good community clinic with reasonable prices and told Dad I would give him Tom’s veterinary visit for his birthday. He was pleased. Tom wasn’t.

I borrowed a hard crate from a friend and set it outside–“so Tom can get used to seeing it.” Tom took off and didn’t appear until three days later when I returned the crate to the garage. We decided Tom had seen a cat-carrier, probably up close, at least once in his lifetime–and wasn’t fond of the experience.

My hairdresser told me she favored a soft-sided case, that it was easy to sort of “stuff the cat in and zip it up fast.” I started to purchase one, but my daughter-in-law said she’d loan me theirs. I figured I’d give Tom’s reluctance a couple weeks to subside.

He wouldn’t sleep in his little bed on Mom and Dad’s porch, so we moved it to the main house’s porch beside the den. He still wouldn’t use the bed, but he curled up almost every night on one of the wicker chair cushions. During the day, he’d walk or sit with Dad, stroll in the gardens, and nap in the sunlight on the bank or in the shade of one of the porches. He drank from a birdbath that I always filled with fresh water. He hunted up and down the ravine, the old home place he returned to at some point every day.

I started a morning-treat ritual with Tom, and he grew to like me. I gave him a small piece of meat or fish, and when I had no leftovers, I pulled out a small container of purchased cat food that I always kept on hand. After the appetizer, he climbed the steps to the apartment steps and finished off his bowl of Meow Mix.

Tom loved to aggravate our little Shih-tzu Murphy by meowing at her through the glass door of the den. She was always willing to growl, yap, and fuss at him. When Dave took her out for her bedtime walk, Tom either followed them down the street, Murphy barking and pulling at her leash until Dave had to pick her up and carry her away from the cat. Or if TomTom was already sleepy, he’d maybe open one eye from the middle of his warm, curled-up self and totally ignore that silly dog.

About the third week into our newly-cemented relationship, Tom began to walk into The Cellar when I’d open the door. He’d make one loop around the small kitchen area and then he was ready to get back outside. He also let me pick him up. He wouldn’t stay long, and he wiggled, but he didn’t really fight it, and he never scratched me.

I figured he was ready for the trip to the vet.  Easy-peasy this time.

I never got him there.

The last time we saw TomTom was right before the New Year, a couple of weeks after I’d sent out the Christmas newsletter where I included this photo of Tom sitting on a rock in the rose garden. It was also just about the same time that the neighborhood coyote sightings began. First, a woman posted that she’d seen a three-legged coyote. Next, another neighbor spotted one. One family came upon three in their back yard.

I put a Missing Cat notice on our neighborhood website. Several friends and neighbors told me, “He’s just tom-catting around. He’ll be back, and when you get him fixed, he’ll stop that.” In my heart, I knew he wouldn’t be found, wouldn’t be back. In my heart, I knew if TomTom could make it home, he would. He wouldn’t give up his morning ritual, he wouldn’t want to sleep anywhere else but the wicker chair, and he would never choose some other entertainment over tormenting Murphy.

It took me several days of missing Tom to put the pieces together, maybe because I didn’t want to. Actually, Dad said it first. “The coyotes got my TomTom.”

My post is still up on the NextDoor website. Last week, a sweet neighbor replied with a list of places to post notices for a lost animal. I wrote that I thought the coyotes got Tom. She replied she was sorry, and that she’d still look for him.

This morning, Dave spotted a coyote between two birch trees on the edge of our ravine. He said it wasn’t the three-legged one, so that meant there are at least two. I told him about the three seen together in the back yard a couple streets over. He hadn’t seen that post.

So here’s what I wrote on my Missing Cat thread this morning:  “I’m going to take this post down tomorrow morning. A coyote was in our back yard just now. Everybody, watch your animals.”