“The homemade pie has been under siege for a century, and surely its survival is endangered.”
― Janet Clarkson, Pie: A Global History

It is not meant for me to take a pie to a dinner.

The first one to take a dive, so to speak, was chess. I was testing it for doneness. The middle was supposed to lose its wiggle. I reached in the oven with two potholders, pulled one of the two pies out, and dropped it on the oven door. 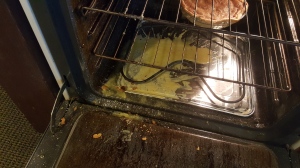 And down the crack between the door and the rest of the stove. And into the drawer under the oven and on the floor. I wiped it off the hot oven door and tested the second pie by jiggling the rack. The middle didn’t move much. I left it in the oven to firm up, happily congratulating myself for having the forethought to bake two. 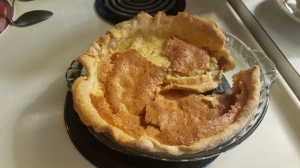 I took the second pie to a writing group meeting, told the sad story of Pie #1, and proudly cut into our favorite. It was almost liquid. So much for the lack of wiggle, but we ate it anyway.

I cleaned the inside of the oven, and a few weeks later, my young friend Maryn, the college daughter of good friends Bob and Linda, took the greater part of an hour to clean the remainder off the oven front and drawer.

Last night, Dave and I were headed to Bob and Linda’s for dinner. Six of us are headed for the Keys this month, so we we met to make plans. I made pies for dessert, one chocolate and one key lime. Bob loves meringue, so I used extra egg whites to build mounds of fluff on top of each. I shaped each a little differently from the other. I’ve seen a sort of plateau-like topping on key lime pies–in the Keys–so I flattened the top smoothly, the meringue still measuring about four inches high. The chocolate one I fashioned in peaks and swirls. I successfully browned both in the oven, cooled both, and made secure traveling spots for each in the back of the van.

When we arrived at Bob and Linda’s house, Dave carried in a bag of dinner items I’d brought, while I carefully lifted the key lime pie and started up the walk behind him. I saw the handrail on the porch steps move just as Dave grabbed it. It seemed his body lifted into the air in slow motion, legs straight out, something like a levitation demonstration. In a second, I reached for him as I balanced the pie on my left hand.

Somehow–SOMEHOW–as he fell backward, his flailing arm knocked the pie from my hand. Actually, it was more like he smacked my hand and the pie took to the sky. It soared–I think I saw it spin–and then gravity pulled it straight down. It made a scraping sound as it landed flat on its aluminum pan bottom. The meringue, however, flew through the breeze, and plopped here, there, and everywhere on the sidewalk and in the front shrub bed. 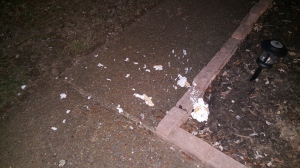 Linda was on the porch and down the steps almost, it seemed, before the pie landed. I believe I’d finished my cursing and ranting about how I would never try to take a damn pie anywhere ever again. With Dave coaching, she helped him onto his feet. He wasn’t hurt, fortunate that he had not braced himself with his bandaged left hand, which was the result of a self-inflicted stabbing with a pair of scissors earlier in the week. When he turned to mount the stairs, I saw a wide swath of white on his derriere.  Linda fetched a wet towel to clean him off. I’ll never know how the meringue got UNDER him.

“I can’t believe that pie is still in one piece. Look at it, it doesn’t look too bad,” Linda said. 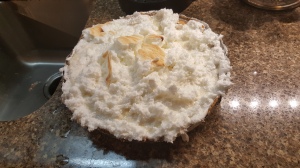 Actually, it looked like the meringue had just been sheared off, and now, instead of a four-inch plateau of well-beaten egg whites, it had an inch and a half of lumpy white cloud. Somehow, the very middle of the browned top had fallen back down in its same spot. Not too bad! (Sorry I don’t have a “before” picture for comparison.)

I don’t remember who carried in the chocolate pie, but everybody ate pie of both varieties. And had seconds.

They say that bad things happen in threes, so if we’re talking about scrambled pies, I still have one more to go in the series. But what if my third try at taking a pie might be the time the pie arrives at its destination in perfect form? After the chess crack-up and the key lime calamity, I’m not channeling Pollyanna, but that could happen. 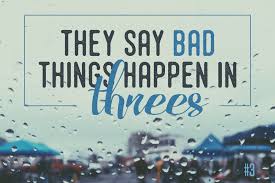 n the way home, I told Dave he’d done two doozies in one week: stabbing his hand with the scissors and bathing his butt in pie meringue. Then I reminded him that a few weeks ago, he hit that garbage can when he swerved to miss an oncoming car that was over the center line. I allowed maybe his trio of tribulations was complete, but he said the motoring misfortune happened too long ago to count as one of his three mishaps.

The man is a pessimist. 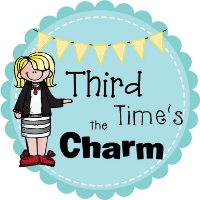