Let’s just say that I should remember not to always follow Mom’s advice, especially when it comes to hot peppers. 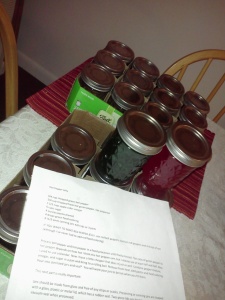 She needed a project. She decided to make hot pepper jelly since we have peppers of all sorts coming out our ears, we all love the stuff, and we like to gift it for Christmas. I laid in a supply of sugar, pectin, vinegar, and jars.

She’s had a bit of stomach trouble lately so when Dad picked the passel of peppers last week, she wasn’t ready to start canning. Today was the fourth day for those peppers. They were in the fridge, and they looked fine, but it was just time.

I told her I would help her. I put ham and beans on the stove to start some soup for lunch, then I began to chop peppers and boil water.

I said, “Why don’t you chop some vegetables for the bean soup?”

We made her a place at the kitchen table where she could sit and slice carrots, celery, and onions for the soup. I said, “Just tell me when you’re ready for me to throw it in the pot.” When I had added her choppings and washed the cutting board, I jarred up the first batch of jelly. It was red. It was also a bit boring, according to Mom.

“I think you should just throw the whole jalapenos in the next batch. We do not want hot pepper jelly that is not hot.”

A few weeks ago, our long-term cleaning lady asked me if the peppers I just sacked up for her were hot. I said, “Manuela, they burned my hands when I seeded them for salsa.”

She answered, “Seeded them? Huh. I just throw the whole thing in the blender.”

So we did two more batches Manuela-style.

If you want some really, really, really hot pepper jelly, let me know. I know where to find it. I’m calling it “Mama Blair’s Hotter-than-Hale Pepper Jelly”.

And I refuse to listen to that woman again when she counsels me regarding hot pepper jelly. I think she’s a dragon.

I used to be a health care financial executive -- I don't miss it. Before that, I was in radio/TV -- I still miss that. Radio has to be the craziest business ever invented.Today, I am happy to be living in this wandering place, blessed to be married to the best man I've ever known, and being blessed by my 89-year-old mother living with us. I miss my dad; he died in November 2018. I write (all kinds of stuff), garden, cook, clean, sew (a little), play anything with a keyboard--including the organ, and love on my grand-babies. We watch all the wildlife that frequent the ravine and our Shih-poo pup just turned two. Life is abundant around these parts. View all posts by Diana Blair Revell