I jumped from my chair when something hit the window beside my desk. A cardinal…on the pavement of the patio. And as quickly as my feet brushed the floor, a Cooper’s hawk snagged the wounded redbird and took to the sky. I breathed jagged ins and outs. My heart sped.

“This is nature,” I told myself. But it’s the piece of nature that I do not love. It’s been several days now, and I still semi-shudder at the thought of that few seconds. 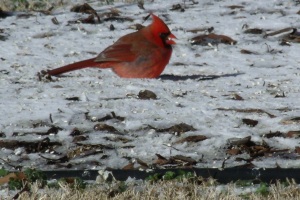 I have watched the hawks swoop upon the back yard for months. What I expected was that one of the doves who gleans the leavings from the feeders would be swept away, one of these birds that my bird-hunting Uncle Hugh Lee would never fire upon. “The dove is the Bird of Peace,” he said. “You don’t kill a Bird of Peace.”

The first year on the ravine, we installed birdfeeders to mimic the layout of the yard at our former home. When our expected yellow finches did not arrive, we changed the seed and the feeders, and greedy blackbirds descended in flocks. We learned that blackbirds do not like safflower seeds, but everybody else does, so we changed the menu again and welcomed cardinals, woodpeckers, chickadees, purple finches, and all the common varieties of wrens and sparrows. Doves gathered under the feeders to clean up. For three years, we had Lonesome. Who knows what happened to his partner, maybe a hawk. And now, who knows what happened to Lonesome. The doves now congregate in even numbers.

So much of our life here has been tied to the animals. The first two years, there was the skulk of foxes in the ravine. Lots of foxes, including two litters of pups, three in one and five in the other. One of the yearlings nested under the ramp to the porch on the side of the house, always taking leave before the humans might interfere. We watched them dig for moles and bury food for future meals.They caught pieces of hotdogs in mid-air that the neighbor tossed to them in the summer dusk. We noticed that, while they were off the ground, they were snapping up fireflies. When we returned to The Compound following some evening outing, the headlights caught the eyes of little heads peeking up over the ravine banks. It seemed that they’d been waiting up for us.

The raccoons showed themselves almost immediately. There were three kits that trailed after a waddly-wooly mama when she came to the yard to scout for food leavings, and then a hulking old fellow, biggest raccoon I’d ever seen, completely silver, that we did not see again after that first year. One evening, Dave and I watched a raccoon scale one of the tall trees, probably fifty feet, to rest in a crook between two of the top branches. We figured he was a young one.

The feral calico cat came the first year. We are such creative and original thinkers that we named her Kitty. We watched her stand off a fox one afternoon between our yard and the neighbor’s. She crouched to the ground and backed the vixen up with a threatening feline crawl, until the foxy lady acknowledged Kitty’s superiority by turning white-tipped tail to run. Kitty and I became so close that sometimes she would allow me within fifteen feet of her, then she was gone. No, I mean really gone–for two years. One spring morning, I heard her calling for breakfast from beneath my bathroom window, sitting kitty-pretty as if we’d had tea the afternoon before. She hung around for a year after our Welcome Back and then something caught her, or caught her eye, the something probably akin to a better living arrangement.

We found companionship living on the banks of this old gulch that we call The Ravine. My eighty-something-year-old dad, Grandpa, frequented the ravine by propping a tall ladder’s base against a big tree. He said if he missed a rung on the way down, he’d just slide.
“What about the trip back up?” I asked.
“I hold on with both hands,” he said.
Grandpa dug through the tangles of brush and vine to judiciously remove the deadliest tree-chokers. We laid out something of a feeding station so that we could better watch the comings and goings of our new friends. Grandpa and Grandma keep the blinds wide open in their upstairs den so that they don’t miss the squirrels’ antics in the tall trees on the west side.

One season brought a doe and two spotted fawns. They bedded down in the across-the-street neighbors’ back yard. When Mama left, the twins stayed, mowing down roses, morning glories, and turnip greens. And then they were gone, we guessed to join the protected herd two miles away at the agricultural center.

The community of foxes scattered. After a few weeks, we saw sarcoptic mange on the few young males remaining. It’s the same mange that dogs get. We read up on the disease, especially in foxes, and bought injectible Ivermectin to shoot into treats. It was a long shot, according to all the literature, but we tried to save them.

Once the foxes were gone, rabbits appeared. One little bunny hopped around on the porch just in time for Easter.

Last spring, we watched a fat old mama raccoon stagger across the back yard at 6:00 A.M. like a drunk coming off an all-nighter. She climbed the steps to Grandpa and Grandma’s apartment, hopped onto the rail nearest the wall, shinnied up the porch column, and disappeared. We’d suspected squirrels in their attic space and had already called a carpenter to further seal in the eaves on the porch. We never thought about a nesting raccoon. Before Trevor, our construction guy, finished the work that might seal a creature in, he toured the attic space and pronounced it empty–and very clean.

Groundhogs greeted us early on, without damage, until they discovered just how good Grandpa’s produce tastes at its youngest and most tender. He named them, set live traps, and somebody (Dave or daughter-in-law Vicky, that tiny little hoss of a woman) hauled them, one by one–Fatso, Big Boy, Chubby, and all the others–to the spacious agricultural center property. All reports indicate that they hunkered down and belly-scrambled to the care and prosperity of the burgeoning Ag Center Clan. But last year, new-to-the-compound Gordo foiled us all, despite numerous attempts to move him to a better neighborhood for groundhogs. In late fall, neighbors sighted Gordo pinned to the ground by a coyote in their back yard, but we expect him back.  The neighbor showered the coyote with a hail of BB’s and when the tormenter loosened his grip, the un-injured Gordo made fast to the safety of the ravine. In April or May, we’ll all be complaining about the havoc among the gardens, both flower and vegetable. Gordo adores morning glories and cosmos, squash and Blue Lake bunch beans.

The intersection of human animals and their less domesticated relatives in the kingdom is a delicate point of balance. Every movement by either man or beast, any aid from the higher-ups in the food chain, and any modification made to the combined home turf informs and directs change for each individual. The great naturalist John Muir said it best, “When we tug at a single thing in nature, we find it attached to the rest of the world.”

We feed the songbirds, and a hawk makes dinner of the prettiest one. We clear the vines that threaten to deaden the trees that anchor and define the ravine, and the vixens label us as too familiar. We feed the raccoons to deter them from the garbage cans, and they take up residence in the attic of the apartment. We seal them out and put them back in their place, the place we invited them from when we first fed them.

We continually re-evaluate our relationships to these animals, some who gathered here before someone thought of building brick ranch-style homes alone this great ditch, and others because someone did.

The thermometer read 12 degrees this morning–in the sun. The purple finches and chickadees flitted and darted between the almost-empty feeders. The doves, in their puffiest winter coats, gleaned whatever spill they could find.

The supremely beautiful cardinals, male and female, orange beaks shining, took turns with the remaining small pieces of bread Grandma and Grandpa tossed from their balcony porch yesterday. The usually-present squirrels stayed in their warm beds. After I finished my third cup of coffee, I layered up to fill the feeders, and when I came back inside to the warmth of The Cellar, I ordered another fifty pound bag of safflower seed.


Maybe the coyote was just passing through. Maybe a family of foxes will birth babies here again. Maybe the hawk sightings will be fewer. Maybe Kitty will return for a twelve-month stint. Maybe Gordo will decide he really doesn’t like morning glories, after all.

Happy New Year~from all of us here On the Ravine.