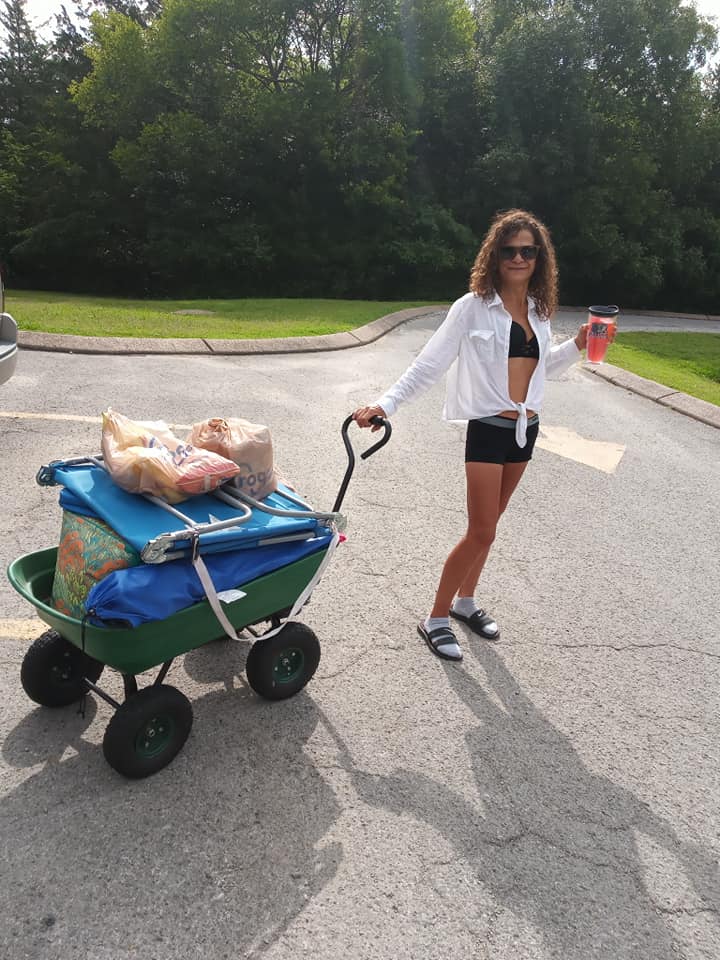 Cindy Louise Santana Guinn died yesterday morning. Around the Compound, we are all numb with shock. She was one of the younger kids in her family, and her brothers and sisters, nieces are devastated as is her twelve-year-old son, Connor.

An ambulance took her to the hospital Wednesday morning and, two days later, she was gone. She left in just about the way she did everything–in a hurry.

On Monday, she mowed and trimmed the lawn, then worked on some soaker hoses and pulled some weeds, bee-bopping around the yard as usual.

Normally, Neil, our permanent houseguest, would cook her breakfast downstairs in The Cellar and she’d chow down bacon or sausage, eggs, and biscuits a little before 9 o’clock, swigging down a huge glass of orange juice. She always wanted mustard on her sausage or bacon biscuit unless there was a tomato involved. Then she wanted mayonnaise. “You gotta have that mayo the minute you say tomato, she told me.

Monday, I was down with aching legs, and Neil was gone to a job in Lawrenceburg, so she didn’t get breakfast. About noon, I texted her.

We didn’t go through our standard ritual for finding each other outside. I’d usually yell “Cindy Lou” and she’d reply “Where are you?” until we saw each other somewhere on the grounds.

I texted, “Hey, I bet you’re hungry. You want a bowl of leftover chicken and dressing?”

So I did. A few minutes later, I saw her skip up the ramp and go back down eating. She could put away some food.

Neil cooked her the last breakfast she had here. Neil and Cindy were a funny thing together. They loved each other. Every once in a while Cindy would slap Neil on the butt and then say, “But you’re just not my type.” He’d often help her fix a lawnmower or truck or something else at her sister Cathy’s, where Cindy also lived with Lee, Cathy’s wife, and Brenda, a friend. (It’s a big house.)

The last time Cindy called Neil for help, a big snakes had wound itself into a tree trunk. Lee was mowing the front yard, saw it, and drove on. All these women were scared of snakes. Lee had assembled a scraper on a pole. Neil and Oliver, Neil’s teenage son who was here at the time, used the snake pole to lift it out of the tree and then herd it across the street so it could climb somebody else’s tree. Neil says a large audience of neighbors gathered to witness the event.

Last July, Cindy and I were pulling weeds, as usual, in the lower garden close to the ravine. She was on the side closest to our big ditch where a birdbath has been sinking. She said she thought she’d move the birdbath and attempt to fill in the low place. I said okay and she started toward the spot, turned around, and crossed fifteen feet of yard with three steps, climbed a curly willow tree, and hung onto a branch. I wish I’d snapped a photo, but I was on the ground laughing too hard to get up. I knew she’d just seen a snake.

She was down the tree just about as quickly as she’d gone up, and described a “big black snake, I mean half a foot around and four feet long” stretched out along the base of the birdbath. She shivered a little and went back to her project. The snake had taken a high-speed exit to the ravine and Cindy was happy. I was still laughing.

We didn’t hug or get close, hadn’t for months, but she had vacationed in Florida a couple weeks ago and was now extra-distancing. She was a big hugger, as were her brothers and sisters. She always visited Grandma until Covid took over the land. Sometimes she brought presents. We missed the hugs.

Cindy was a fixture around The Compound for at least seven years. She tended our lawn and gardens once a week. Sometimes she helped move stuff. She painted and wallpapered my studio. She’d jump on a ladder and change a lightbulb or clean a fan. She shampooed carpets and upholstery a couple times. One year, she volunteered to clean the windows because, you see, she’d mixed up the “most awesome” cleaner. I don’t know what the mixture was exactly, but the windows sparkled.

A graphics designer in the past, Cindy felt a special calling to run her own lawn and garden business. She might have weighed 100 pounds, but she was tough as nails. She said she owed that to her Puerto Rican DNA.

Family was everything to the Santana kids.

They’d lost a sister, two brothers, and their mother. Maybe those losses made them cling even tighter. Then Cathy’s son died a year ago. That was really tough. Now this one.

I don’t know how we’ll memorialize Cindy, but right now the huge patch of wildflowers, zinnias, marigolds, cosmos, and sunflowers pay homage. Cindy and I decided on planting a “pollinator garden” a couple years ago, so we just let the grasses and whatever grow up in that patch, bloom, and feed birds, bees, and butterflies–and whoever else shows up to eat. She made me buy lots of sunflower seeds. 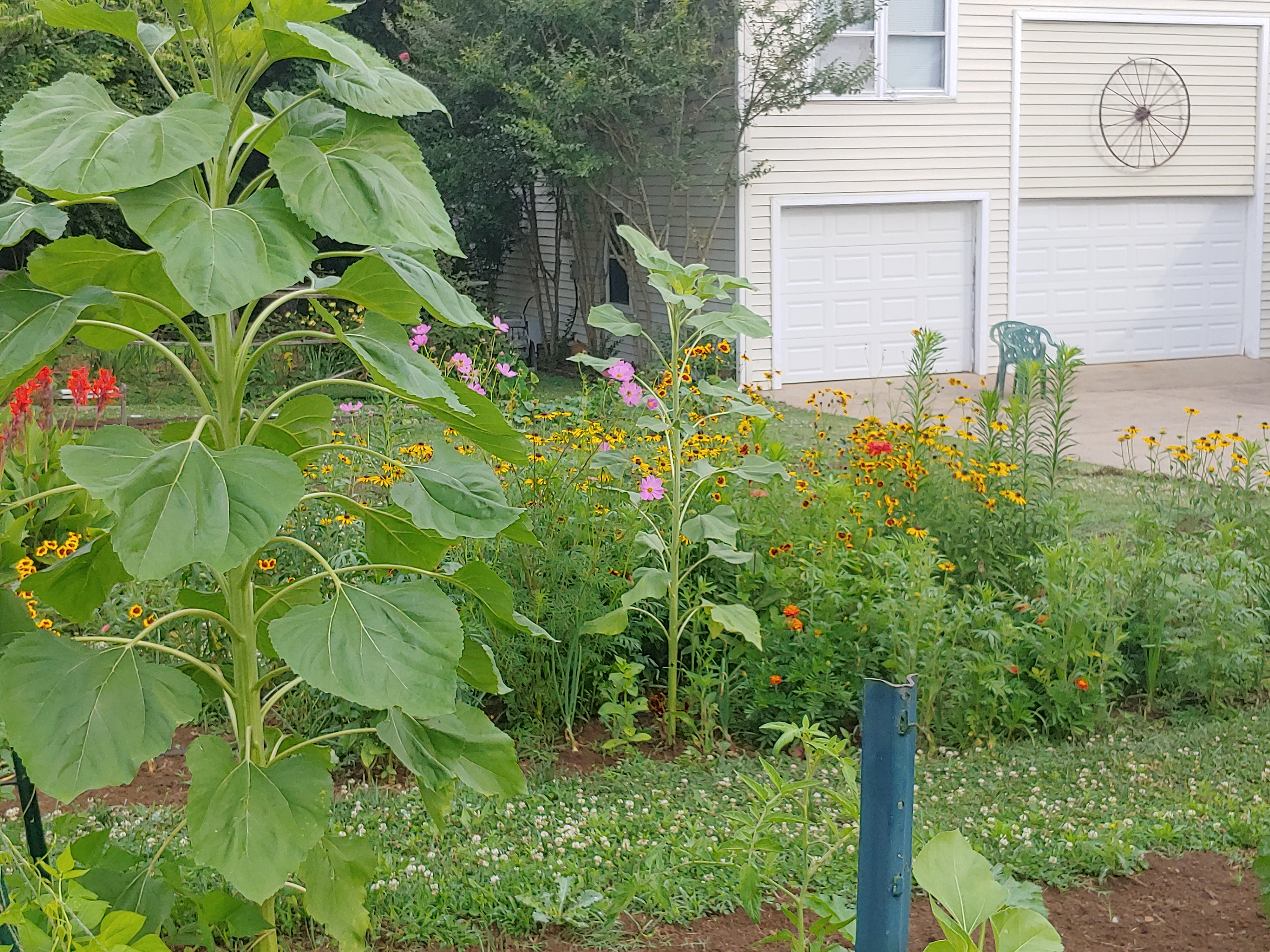 That patch will go to seed this fall. I’ll collect and sow them next spring. The volunteers and self-seeders will grow again. I’ve got some sunflower seeds and someone in my online gardening group said to go ahead and plant them.

Dave and I wanted to send food to the house last night. I finally settled on Publix fried chicken and all the sides, but when I got to the deli, the clerk said they’d have to fry some more. I didn’t want to wait, so I rounded up a boneless ham, potato salad, baked beans, green salad, rolls, and two pies.

The sun was going down when I pulled into the driveway. The sunflowers–the Alaska Mammoths, American Giants, wild ones, and all the rest–cast long shadows in the cloudy sunset, every head bowed in sorrow. 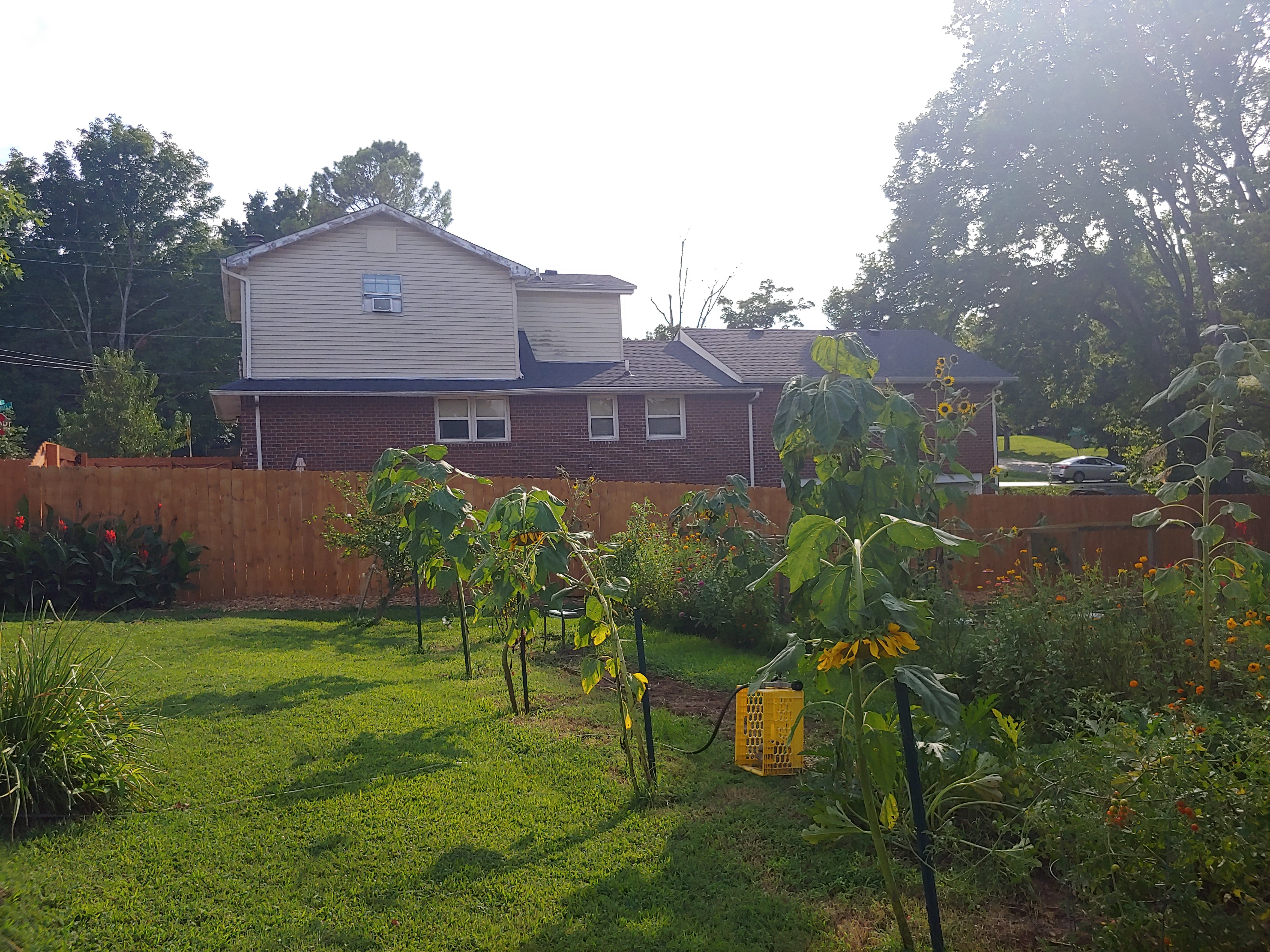